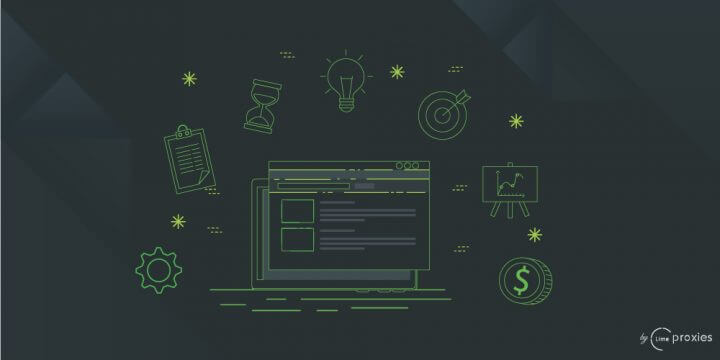 Those who breathe the coding language invest in a profession popularly named as Data Science. They work on pulling out relevant data that is going to add a high value when used for numerous purposes. Such kinds are referred as Data Scientists. Their main focus lies on the management and analysis of large heaps of data.

On the other hand, not everyone in this world is born with a special talent such as the coders or developers . With high proficient coders using tools that we merely understand, there are tools which can help you analyse information even if you are not technically sound. In this article, we will discuss few non-technical tools that you would use in your day to day life that is prominently used in the world of Data analytics.

Before we jump into this, let’s see how data analysis is conducted, It is a long but an effective procedure of extracting useful data from a data dump. This procedure includes a lot of qualitative and quantitative methods to extract the required data, of course, this is not done manually, there are a lot of tools that are used to process these data and get a clean output.

Let’s have a look at some of these tools.

Rapidminer is a cross-platform software that was developed by the company RapidMiner in 2006. This tool is very easy to use and helps pre-processing, segregating and machine learning of huge dumps of data. Being a paid tool, there are certain free versions available but they have their own restrictions. The best free version tool, however, is the Rapidminer Studio Free edition.

This tool, however, came to limelight in 2016 at Gartner Quadrant of Advanced Analytics. With the capability of building machine learning models, this is not just a data mining or cleaning tool. This tool supports various high-end algorithms which are used in day to day lives. With the ability to help build models using Python or R, this tool is the best choice for people who use Data analysis with model building.

Weka is an abbreviation for Waikato Environment for Knowledge Analysis, it is a machine learning application developed on Java platform,where it got its name and was developed at the University of Waikato NZ.

Weka is a free licensed software which makes it a favorite to all the data analysts. It contains various list of algorithms and visualization tools that help in analyzing data and structuring them. This application can be used on Windows, Mac and Linux as of now.

The first version was designed mainly for analysis of data, however, the full version built on Java was initiated in 1997 which included all the features a present day data analyst needs.

Weka is widely used due to the following reasons: 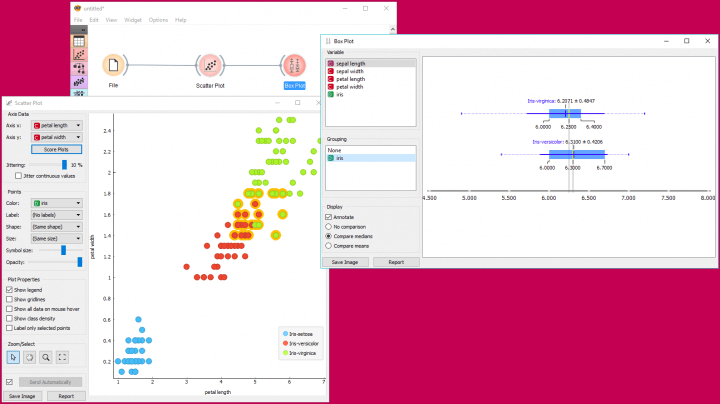 Orange is an open source software for data mining, visualization and machine learning developed at the University of Ljubljana in 1997.

The features of orange range from simple data visualization, data mining to complex evaluation of understanding algorithms and modelling structures.

At one end when data analysts use Orange as a data visualization tool, advanced users/developers can use it as a Python library for manipulating data and altering the widgets. Orange is also released under a free license allowing users to enjoy a great experience in data visualization.

Building a model on Orange will be done by creating a flowchart which sounds interesting as you would be able to understand the exact procedure of data mining. This application is available on Windows, OSX, and Linux, but can also be run on Python repository.

For advanced users wanting to use this on Python, 2 stable versions are available, one on Python 3.0 which is the most recent release and its predecessor which runs on Python 2.7. 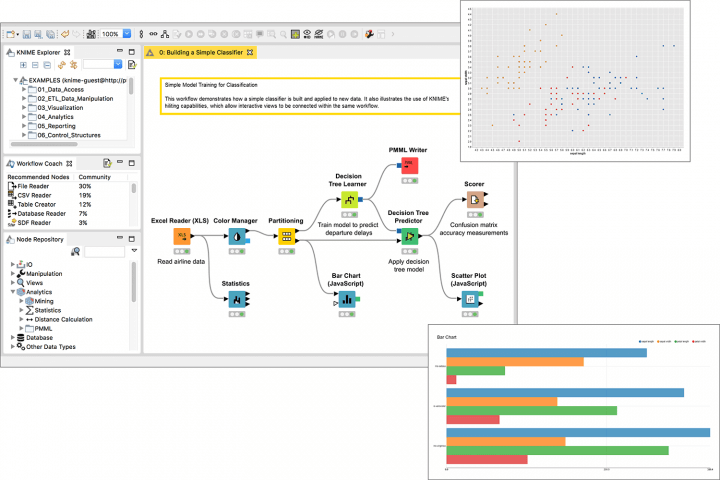 KNIME is a free and open source application which is an abbreviation for Konstanz Information Miner and was introduced in 2006. Being a data pipeline concept, it has integrated data mining and machine learning. KNIME is built on Java which makes it easy to be installed on all the platforms with ease.

KNIME is mostly used in other areas like CRM’s for analyzing custom data and in business intelligence as well.

The main feature of KNIME is that it allows its users to visually create data flows or flowcharts, select certain steps at a time to execute them or maybe all at a time and then form a collective analysis to discuss results, views on the same.

In the Gartner Quadrant 2018, KNIME was rated one among the top 4 products used for data visualization and analytics.

Tableau is a data visualization software developed by Tableau, a software company in Seattle, Washington, US which provides visualization on business intelligence. This application was introduced in 2003 by 3 developers whose idea was to simplify visualization techniques analyzing data structures and cubes.

According to a recent survey, Tableau and QlikView  are recognised to be the most powerful software for business intelligence. The main advantage of this software is the ability to allow you to understand data structuring in real time, apart from allowing users to share the analysis with each other. 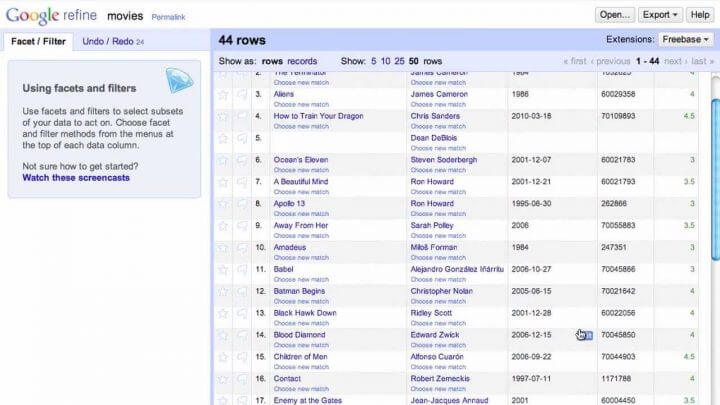 Having a series of change in names for the application, The purpose was still the same, Open Refine was previously called Google Refine and was called Freebase gridworks prior to it and is an open source application which is used for data cleaning and transformation to other formats which are called data wrangling, it works similar to excel and google spreadsheets,

The main function of this tool is that of its portable like feature allows actions used on one dataset to be implemented on another dataset.

Open Refine does not store formulae like spreadsheets in their cell, however, the transformation or structuring of data is done using the formula manually on each cell. All the expressions/formulae are written in General Refine Expression Language(GREL).

Open Refine is a web UI which runs on a web server but is also available to use on local machines.

Import files are available in the following formats for Open Refine:

Export is supported in the following formats:

Talend is a high-speed enterprise data integration tool, founded by NASDAQ 13 years ago in 2005. Allowing data integration on all forms of cloud formats such as public, private and hybrid cloud, this tool is also available in on-premises environments.

Talend publishes its code and code modules in Apache License, however, all the applications are designed on Java platform. Basically, talend is a tool that can clean, transform and visualize data at one go.

With its capability to save and redo tasks from one data set to another makes it unique among so many applications in today’s world. It also has the auto-discovery feature or auto-suggestion feature that suggests options to the user enhancing data analysis 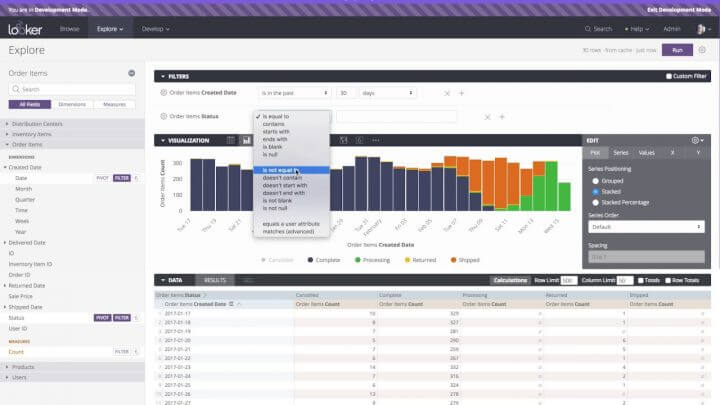 Being a cloud-based platform, Looker specializes in 4 aspects, data management, visualizations, business intelligence, and analytics. It has a user-friendly interface as well as provides content in a graphical manner where it becomes easier for you to learn and understand the insights being provided. It has high data security and has a unique feature where customizations of Google and Facebook ad reports are conducted. View its extended visualization library and indulge in its assistance of creating small applications for your use. For their visualization options, they retrieve data directly from the source. 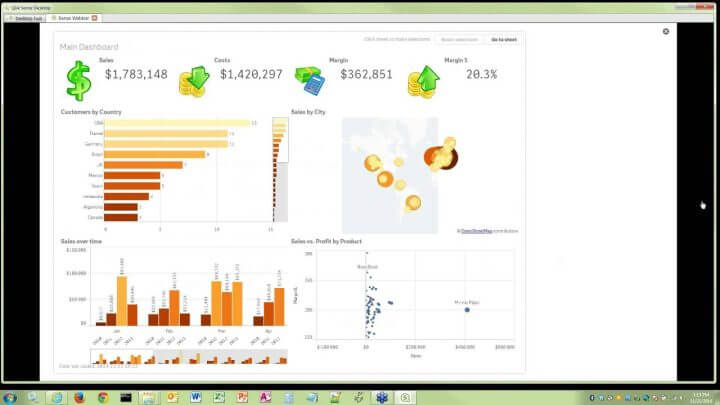 Qlik sense Offers multiple essential and easy to use features such as drop-down, smart search and access to real-time analytics, this could based application is a tool that can be viewed anywhere. Supporting databases such as IBM, Microsoft, Oracle, and many others, this tool is ideal for any size of business. Choose between a general or a business plan and view your analytic data on any device. 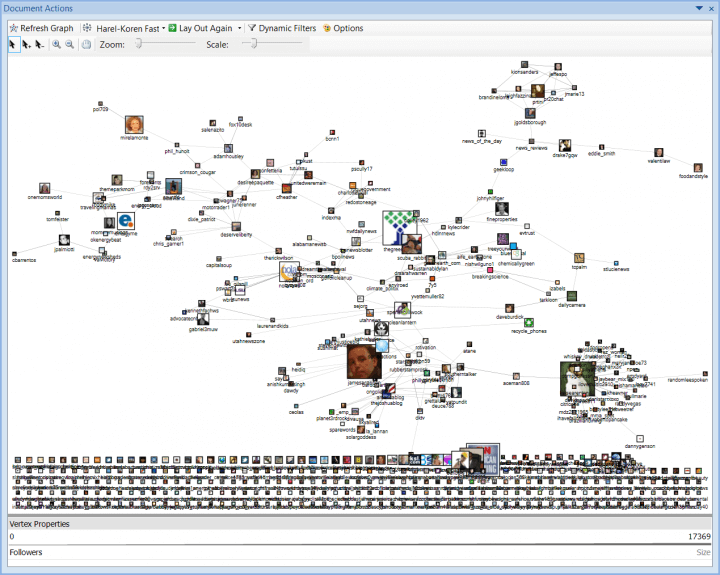 Another tool that gives you data analysis but has a dedicated platform for the online world. Functioning in the fields of social network and content analysis, you can improve your content marketing strategies with data that can help you enhance your social networks. Specialized for data-driven marketers, this tool has also included in its list social media analytics feature allowing you to serve your online users better. From giving you the option of importing data to various sources to provide you with better researching features, NodeXL is the finest social networking data analytics tool you require.

Analysis can be simple and easy if you understand how data analytics is done using different tools and techniques. Above are some important tools which will help all the analysis to’ sort and structure data systematically in the long run.

With these tools, it is always recommended to use proxies to be safe and untraceable. With a tool like LimeProxies, you can always be sure that you will be safe and anonymous on the web. 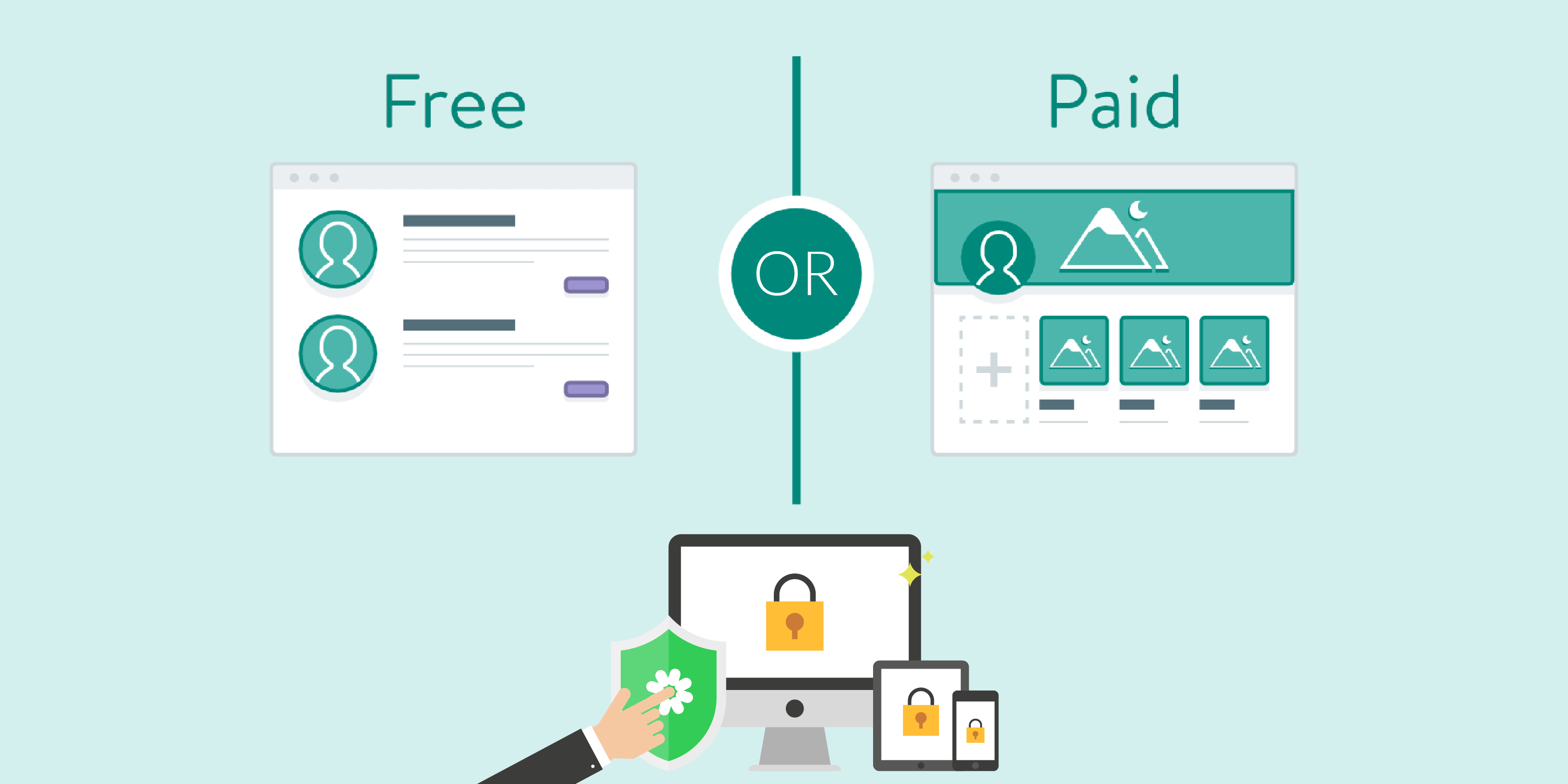 Proxies are a great tool to enhance internet users’ security and privacy. When proxies first emerged, it was viewed in a negative light as some thought that it was used only by people hiding their suspicious and even criminal acts.

Digital Fingerprints can be eliminated forever: Here's how:

There is only one reason why this is happening, your digital fingerprints are giving away your identity. Digital Fingerprints can be eliminated forever.